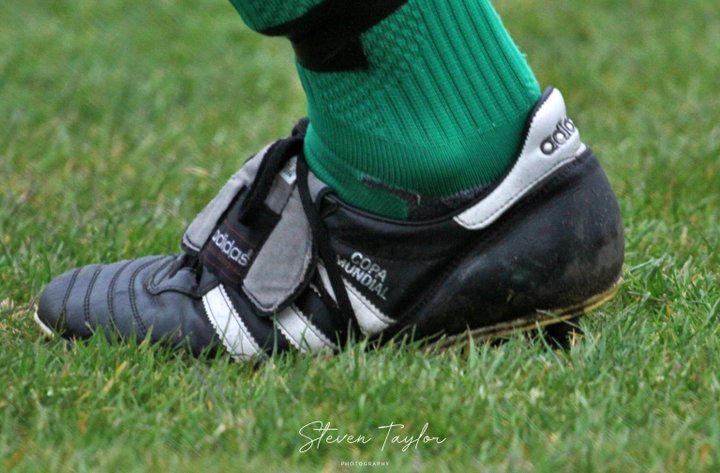 It was an afternoon of late, decisive goals as THEO HEWSON-BETTS casts his eye over Saturday's West Lancashire League action

Thornton Cleveleys have drawn level on points with Euxton Villa as the two sides continue to trade blows at the top of the West Lancashire Premier Division.

A Slyne FC own goal was the decider for in a 2-1 victory for Thornton, who would have moved top but for a late equaliser for Euxton Villa against Vickerstown.

Patrick Bibby was the hero for Villa, converting a penalty in the 91st minute to secure a vital point that kept the home team top of the table on goal difference. 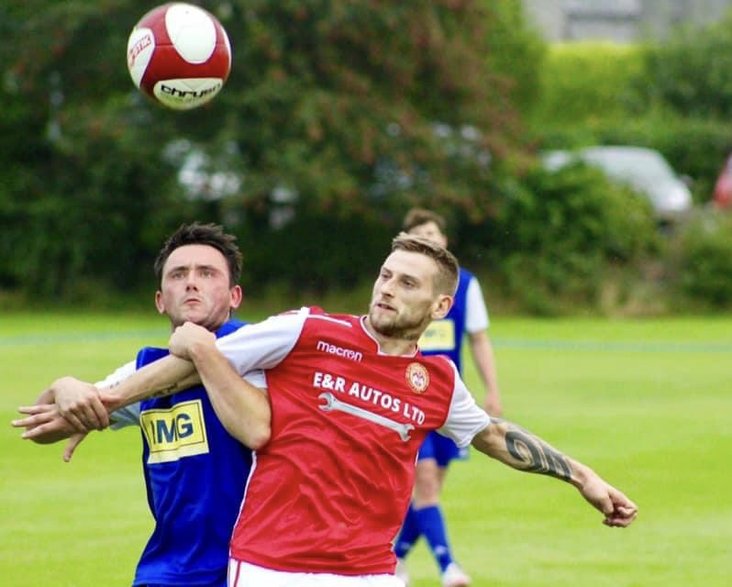 Ricky Ball was once again on the scoresheet for Milnthorpe

That game had started with another own goal, with Vickerstown the beneficiaries of a mix-up at the back.

Nathan Parish equalised immediately though before Kyle Delves thought he may have grabbed the decider when he converted just after the break.

Elsewhere in the top tier, Burscough Richmond - the masters of the late comeback - were at it again with their spectacular win against CMB.

Billy Whittle had put Richmond ahead in the 14th minute, but CMB attacked with vengeance and found themselves leading 3-1 on 75 minutes, with Will Archer, Dan Crook and Dylan Winstanley scoring for the home side.

Burscough needed something big, and it came in the form of Billy Whittle’s second of the game.

The clock ticked past 90 minutes and the travelling team still needed a saviour, so they turned to their Lorde... Jordan Lorde that is, who scored twice in added time to get his team three points, to move them up to fourth.

Blackpool Wren Rovers find themselves in fifth place following their 3-0 defeat of Whitehaven Amateurs, Danny Morris, Ben Bradley and Josh Few all scoring before a third of the game had passed.

Southport Hesketh are still looking for their first win of the season, losing to Fulwood Amateurs this time out.

The game ended 3-2 with Matthew Howard and Danny Singleton putting Southport 2-0 up going into the break, before Fulwood’s Will Pitt, Brad Pitt (no, not the internationally acclaimed movie star) and Ollie Molloy broke Hesketh hearts in the second period.

Coppull United were involved in a five-goal thriller with Turton. Ash Farlow and Vladut Spiradon were the scorers for the travelling team but Coppull tied up the points courtesy of goals from Nathan Lindley, Adam Pickstock and James McIver.

Chilufya Mututu scored a late winner to help Lytham get over the line against Hurst Green in what was another late comeback in the Premier Division this weekend.

Mututu had put Lytham ahead before goals from Sam Heap and Danny Mort swung the needle the other way.
Tom Pickervance levelled the game in the 60th minute before that man Mututu turned home the winner.

Finally in the Premier Division, Max Landless kept his good form going with the winning goal against Tempest United.

Danny Haines got Poulton ahead before Landless notched the second. George Scott scored for the home team in the 84th minute but it was ultimately a consolation goal.

To Division One then, and we cannot start anywhere other than Wyre Villa’s 8-0 demolition of Crooklands Casuals.

Courtney Skerritt, Lewis Wainwright, Oliver Evans (who got a hat-trick on the day), Aaron Houghton, Dion Holden and Harvey Close got on the scoresheet as Wyre cranked up the pressure on table-toppers Milnthorpe Corinthians who had to make do with a point at home to Haslingden St Mary’s

Corinthians came from behind twice in the match, with Ricky Ball (pictured) and Nathan Hankinson cancelling out Aiden Marshall’s and Lewis Hanley’s goals for the visitors.

At the opposite end of the table, there was a relative success story for bottom-dwellers Horwich St Marys Victoria, as they picked up their first point of the season against Croston Sports.

Matthew Wood had put Victoria in the ascendency around the 60-minute mark, only for Ryan Smith to scupper dreams of three points for the home side with his 88th-minute equaliser.

Kendal County, sat third from bottom in the table, couldn’t match Horwich’s success, Hesketh Bank managing to slot six goals past the keeper in a 6-1 drubbing.

Nathan Gonzalez got a hat-trick for the travelling team, George Bind notched up two of his own and James Hanson finished the game off. Bailey Carlos got the consolation for Kendal.

The other two games in Division One saw Hawcoat Park defeat Stoneclough 2-0 with Nathan Cloudsdale and Alex Bollans getting on the scoresheet while Eagley saw off Askam United 4-2 with Rhys Hardie, Akhbar Khoshab and a Bailey Wallace double rendering the effort of Ben Stoker - whose 60th-minute finish added to an own goal - irrelevant.

In Division Two, Rossendale continued their domination of the division, putting 10 past 11th placed Dalton United.

Tom Hartley scored four, Harry Buckley got a hat-trick and Paul Stannard, Adam McIness and Luke Simpson rounded off the scoring. Gareth Jones bagged a consolation for the visitors.

Carnforth Rovers and Chipping are the two teams closest to Rossendale, both sat six points behind the league leaders, and both kept the pressure on with convincing wins against Furness Rovers and Freckleton respectively.

There were other high-scoring matches across the league but none more eye-catching than Charnock Richard Reserves 4-4 draw with Kendal United.

Bailey Kenny put the visiting Kendal 1-0 up within five minutes before Lewis Pilgrim equalised. Kendal got back in front with goals from Marco Thompson and Ryan Close.

Pilgrim narrowed the gap briefly with his second of the match before Ryan Close made it 2-4 with 40 minutes left to play.

Kendal couldn’t hang on, and Pilgrim completing his hat-trick before Lewis Thompson got the equaliser for Charnock in the 83rd minute.

Galgate beat Cartmel and District 4-1 with Jack Preston getting a double before Alex Moore and an own goal added some sheen to the scoreline. Joel Drinkall was the Cartmel scorer.

Walney Island beat Garstang 4-2. Ric Tomlinson and Jake Baldwin converted for the home side with Zach Walker, Chris Malone and two goals for James Bailey ensuring that Walney headed back north the happier of the two sides.

The last game in Division Two was a tight affair, with Storeys and Burnley United playing out a 1-1 draw. John Pedder and Reid Wolstenholme scoring for their respective teams.

In Division One Reserves, Euxton Villa are hanging on to their first-place position. A tight 1-0 victory away to Turton ensured that the Villa stayed a point clear of Fulwood Amateurs Reserves.

Fulwood kept the pressure on with a 3-1 defeat of Stoneclough Reserves. Aaron Walmsley scored for the visitors but an own goal, and the strikes of Isaac Graham and Charlie Alston bagged up the three points for the second-placed side.

Lostock St Gerards will be kicking themselves as they lost ground on the top two with an end-to-end 3-3 draw with Blackpool Wren Rovers Reserves.
Ric Coley scored twice for Lostock, with Jordan Wignall adding their third. Luke Smith replicated Coley’s success for Blackpool, scoring twice after Jack Birch had got the away side’s first of the game.

Thornton Cleveleys have done their ambitions no harm. The fourth-placed side have a game in hand on the top two and will be flying after their 9-1 dismantling of Horwich St Mary’s Victoria Reserves.
Alwyn Flynn got a hat-trick, Harry Fryer and Owen Bridge both scored twice and Lee Bramall and Stuart Dagger finished off proceedings.

Croston Sports Reserves were beaten 3-2 at home by Tempest United Reserves despite their best attempts at a late push.

Gareth Gemmell (2) and Nick Skelly put the visitors up by three goals going into half-time but Connor Mason and Luke Blockley got Croston back into contention with 10 minutes still to play, but they couldn’t find the equaliser

Finally, Poulton Reserves ran out 3-0 winners against CMB Reserves.
Louis Shields scoring from the penalty spot before Chris Long and Matthew Seal finished the game off,

In Division 2 Reserves this weekend there were fewer gals but no less drama, Coppull United Reserves and Wyre Villa Reserves keeping apace at the top of the table.

Coppull are four points clear at the moment and will be buoyed by a four-goal defeat of Chipping Reserves. Scott Hendy, Sam Hodkinson and Gregg Bricknell (2) were the scorers, all in the second half.

Wyre Villa clung on to a 2-1 win over Rossendale Reserves. The goals of Rob Norton and Brett Ferguson ensuring that a late own goal to the benefit of Rossendale would not have too much of a negative impact.

Elsewhere, last-placed Storey’s reserves couldn’t improve on their tally of one point in the league.

They were defeated 1-0 by Hesketh Bank Reserves, thanks to a John Ashcroft conversion.

Lytham Town Reserves find themselves second-bottom in the table but have played three games fewer than most of the teams around them.

They took their points tally up to six with a 2-1 defeat of Galgate Reserves. Jack Wood got the winner for the home team after Danny Moloney had cancelled out Matthew Nelson’s 15th-minute opener.

The only goalless game of the weekend was played out between Carnforth Rangers Reserves and Thornton Cleveleys A, who both find themselves sat just above Lytham.

 Faber keeping feet on ground as Wrens keep up momentum Blackpool Wren Rovers manager Mark Faber praised his side after seeing them close in on the Premier Division pacesetters with a hard-fought 1-0 win at Fulwood Amateurs, writes THEO HEWSON-BETTS.

Euxton back on top on goal-laden weekend  THEO HEWSON-BETTS reviews the weekend's action as several sides go goal crazy on the first weekend of September.